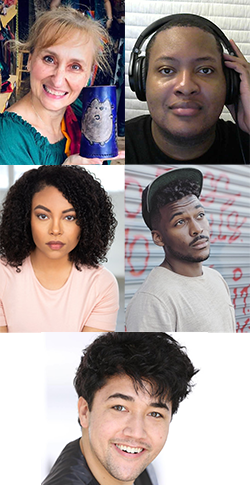 Kat Connery, AKA: Kat Pepmiller or Mama Cosplay has been a part of local Twin Cities fandom since 1983. With a degree in radio and TV broadcasting, Kat spent three years on the local kids’ radio station, Radio Aahs, as a DJ. She has hosted masquerades for Minicon and WorldCon and spent many years as the director of local Masquades. She is an accomplished singer, cosplay enthusiast, knitter, crocheter and scuba diver. You can find her online regularly playing Final Fantasy 14. You’ll be able to hear Kat as Daraya Jonjett in the upcoming Friendsims 2 game to be released this next April.

Born and raised in the Midwest, Andre Ash is an avid gamer, anime fan, and up-and-coming voice-over artist. His fascination with voice-over began after participating in an anime audition while at Anime Central. After that he started a journey of exploring the world of voice-over. His first acting class was an anime dubbing class with director Tony Oliver, which further increased his interest in voice acting. Andre continues to take classes and workshops. Andre’s current hobbies include playing D&D with his friends, learning to improve his questionable cooking, and slowly losing his soul to Genshin Impact.

Southern California native Ashely Biski has acted professionally in films, television, stage, commercials, video games, animation, and anime for over ten plus years. For a big kid who is a movie-cartoon-avid-reading-comic-book-wanna-be-magical-girl, it’s been the perfect way to make a living. She is most recently known for playing the role of Nihility in the upcoming indie game Catalyst Wake, which will be available on Steam. She played opposite of San Diego Padres star Tati’s Fernando Jr. in the pilot On Deck directed by Jumanji’s Ser’Darius Blain. She was recently the face for Ring’s peephole camera international campaign. Along with starting her own production company called Production Peeps, she has also provided various additional voices in anime for Funimation. Ashely is frequently found online playing Final Fantasy 14, eating tacos at the beach, or annoying her husband.

Conrad Haynes is an on-camera and voice-over artist based in Los Angeles. His previous works include Nier Reincarnation (2021), CBS S.W.A.T. (2021), and Crypt TV’s horror series, Fight Night (2019). Conrad is also founder of By The Spirit Books, a Christian, faith-based graphic novel company. Outside of work, he loves hiking, traveling, and watching Horimiya.

Caleb Yen has been an actor since his first role as a cow that said “Got Milk?” in an incredibly random children’s play very few people ever saw. He’s mostly known for his work in anime, including Hathaway in Mobile Suit Gundam: Hathaway, Hyota in Pretty Boy Detective Club, and Eitaro in Re-Main (currently airing weekly on Funimation). Videogame projects include Shadowverse, Borderlands 3, and War of the Visions: Final Fantasy Brave Exvius. He’s a terrible baker (everything burns. everything.), and really likes dim-sum. Oh, and he ate a slice of pie before writing this. It was lovely.

Back to Guests & Speakers

Anime Fusion 2022 is on! Our 10th convention will take place at the Crowne Plaza Minneapolis West on October 21-23, 2022. We’re currently working on the website redesign and content updates for next year’s event. Please check back after the new year for information on Anime Fusion 2022: Remastered! 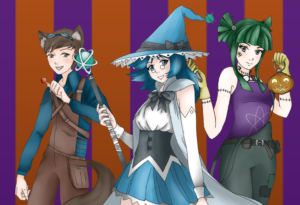